Recommended by the Harmonised European Pharmacopoeia, supplemented with Lecithin, Polysorbate 80 (Tween 80) and L-Histidine 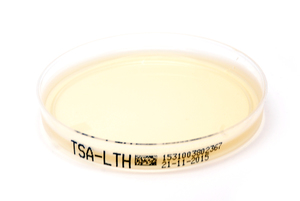 Tryptone Soya Agar is used for the microbiological examination of non-sterile products. It contains two peptones, which support the growth of a wide variety of organisms. It is suitable for the cultivation of both aerobic and anaerobic bacteria. The later is grown either in deep cultures or by incubation under anaerobic conditions as well as yeasts and moulds.

The high number of microorganisms detectable using Tryptone Soya Agar is due to the addition of peptones gained from enzumatic hydrolysis of casein protein and soya proteins. It includes: the detection of Listeria spp, Pasteurella spp, Vibrio spp, Haemophilus vaginalis or Candida spp.

Tryptone Soya Agar contains no carbohydrates, so it can be used in the investigation of haemolytic reactions. The Pharmacopeia European (PhEur) recommends TSA for the enumeration of Total Viable Count in products under examination for microbial load.