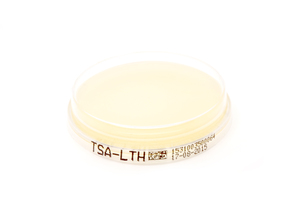 Tryptone Soya Agar is a highly nutritious universal medium for the testing non-sterile products. It is suitable as an inhibitor-free culture medium for the isolation and cultivation of various fastidious bacteria, yeasts and moulds (aerobic and anaerobic).

The variety of detectable microorganisms with Tryptone Soya Agar is due to he casein protein components in the nutrient medium being enzymatically hydrolysed into peptones. This makes it possible to isolate and detect bacteria including: Listeria spp, Pasteurella spp, Vibrio spp, Haemophilus vaginalis or Candida albicans.

Tryptone Soya Agar does not contain any carbohydrate, so it can be used for the study of hemolytic reactions. The European Pharmacopeia recommends Tryptone Soya Agar for total bacteria enumeration in products under examination by this pour or spread plate technique.

Die Addition of lecithin, Tween 80 and histidine neutralises the inhibitory effect on growth caused by aldehydes contained in many detergents and disinfectants, phenols, Hexachlorophene, chlorhexidine, formaldehyde and quaternary ammonium compounds used in preservatives and biocides.